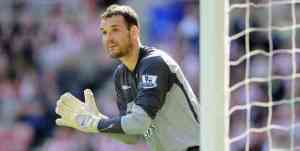 THE fact that Manchester City may be allowed to sign Marton Fulop on an emergency loan after Shay Given’s season-ending injury really irks me.
In today’s paper, rival manager Martin O’Neill said he could be accused of sour grapes by criticising the decision to allow them to bring in Hungarian international Fulop – but I totally agree with him.
Man City should and do have enough keepers on their books – so what if one is injured and they can’t get Joe Hart back, that’s just hard cheese.
The situation echoes the problems across town at Manchester United when Rooney’s crocked, or the toothless Liverpool minus Torres – it baffles me that teams who can pay over £30m for a single player can leave themselves with so little depth to their squads.